For athletes it’s the culmination of years of regular and dedicated training.
For families it inspires hope for a future.
For volunteers it provides a joyous outlet for their generosity.
For media and supporters it celebrates achievement over adversity.
For sponsors it showcases corporate social responsibility and diversity strategies to engaged and potentially new audiences. 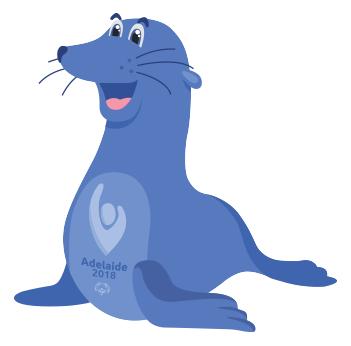 Sammy is a large, graceful sea mammal who lives off the south-west coast of Australia, a place where more than 70 per cent of her family also call home. Sea lions are one of the rarest species in the world and Sammy is proud to be part of and represent such a special and inclusive community.

While they might not look it at first glance, sea lions possess natural sporting abilities and Sammy’s streamlined body and powerful flippers enable her to glide through the water like a torpedo as well as prop herself up to ‘walk’ with a spring in her step on land.

For Sammy, playing sport isn’t just about the thrill of competing, it’s a social activity and Sammy loves spending time with her friends and team mates as well as having her family there on the sidelines to cheer her on. After sport, Sammy enjoys nothing more than floating in the water or sun bathing on the sandy beaches and rocky islands of the South Australian coastline.

Sammy is set to join over 1,000 of her new Special Olympics Australia team mates in Adelaide from 16 – 20 April 2018 and cannot wait to celebrate their successes on a national level.

"Living on the spectacular coastline of South Australia and only a short swim from the beautiful city of Adelaide I am so excited to have the Special Olympics Australia National Games in our backyard this coming April. Happy training and see you at the Games,” says Sammy with a smile!

Click here to see Sammy playing each of the Games sports.

History of the National Games

The 2018 Special Olympics Australia National Games in Adelaide will be the 11th National Games. The first National Games were held in Launceston, Tasmania from 21-22 November 1986 where 200 athletes from Australia and New Zealand competed in aquatics, athletics, football (indoor soccer) and gymnastics. The previous host cities of the National Games are:

Special Olympics Australia provides weekly sports training and regular competition for people with an intellectual disability, giving them opportunities to reach their personal best in sport and life.

At Special Olympics Australia everyone with an intellectual disability is welcome. Some participants join to have fun, make friends and enjoy the warmth of a welcoming community, while others are focussed on winning and receiving medals.

We’re not just a major sports event. Special Olympics provides year-round sports training in multiple sports as well as competition at local, state, national and international level. The pinnacle of our competition ladder is the World Games which is hosted on a four-year cycle in summer and winter sports. We also provide health and leadership programs.

People with intellectual disability can learn new skills and can accomplish goals. They just learn differently, or need more time or support to succeed.

Our focus is to make ability visible. Unlike physical disability, intellectual disability is sometimes invisible.