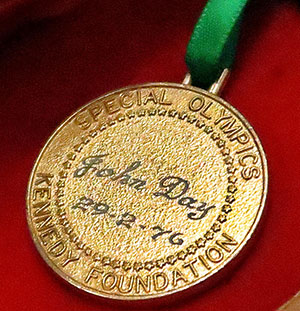 The EKS Award is presented annually to an athlete who has shown great leadership skills, both on and off the sporting field. The award is open to all Special Olympics Australia athletes.

This award honours Special Olympics founder, Eunice Kennedy Shriver. Australian volunteer, Dr John Day inspired this award when he donated the medal he received from Mrs Shriver in 1976 to mark the beginning of Special Olympics in Australia.

Let an athlete know their efforts are making a difference and nominate them today.

The National Awards Program is an exciting opportunity to celebrate our dedicated athletes and volunteers.

The National Awards categories are:

Athlete of the year Winner

Evan has been participating heavily in Special Olympics for approximately 17 years. He represented Victoria in swimming winning gold at both the QLD and WA Games as well as Gold in the Unified Basketball team. Evan is also a participant in the Athlete Leadership Program.

Young Athlete of the year Winner

Chelsea has been involved with Special Olympics and recently won the Melbourne Inner East Club’s Athlete of the Year Award for 2019. She has shown exceptional commitment to her sport, the Club and Special Olympics. She was selected to participated on the LETR Gippsland Regional Engagement and Awareness Tour and selected to deliver a speech on International Day of People with a Disability at the MCG. Above her sporting commitments, Chelsea has taken on a mentoring and coaching role at Athletics Training following her award for the Clubs Athlete of the Year 2019.

Coach of the year Winner

*Greg's nomination was written and submitted prior to Greg's untimely and sad passing on 24 December 2019.
Greg is passionate about tennis and athletes with a disability and ensuring they have the same opportunities as all other tennis players do. Greg has volunteered with Special Olympics since 1993, after completing a coaching course for athletes with a disability. He then started the tennis program with Special Olympics Roselands Region (now Flinders) and has been coaching for Special Olympics on a Saturday morning ever since. Greg became a part of the International Sports Resource Team for Tennis. In 2011 Greg was appointed the Chair of the committee and has only just passed this role on to another committee member but remains in on the committee himself. Greg has been a Technical Delegate for National Games, Head NSW Coach for Tennis for the last 6 National  Games, Head Coach for several World Games Teams and Technical Delegate for several World Games in his time with Special Olympics. Greg has also been the NSW Tennis Coordinator for the past 10 years

Kimberley joined Redlands club as a volunteer basketball coach at just 16 years of age and still at High School. She has generously given her time and knowledge over the last 9 years. Kimberley always conducts herself in a very professional manner whilst still gaining the respect and love of all our basketball athletes. She has coached at the 2014 and 2018 National Games as well as the 2016 and 2020 Junior National Games. Further to this she organises Come and Try events for all community members and arranged for the Brisbane Bullets to attend a skills session for club attendees. Kimberley is also a mentor for the Athlete Leadership Program and is the Regional Basketball coordinator.

Volunteer of the year Winner

Trish has been a registered volunteer since 2015 but her involvement with Special Olympics bowling goes further back with her son Rob. She has acted as a lane manager and provided support to the previous Bowling co-ordinators prior to their retirement. Trish is always happy and despite her enormous group of athletes, Trish was also a member of the Victoria National Games team and is a mentor for the Athlete Leadership Program. As the Club's social coordinator, Trish organized all club events including the 2019 Christmas Dinner Dance where over 150 people attended. 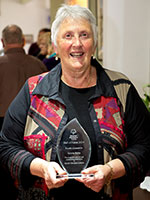