Shooting better videos on your smartphone

If you want people to be able to watch your video at full size on a monitor or TV screen, keep your smartphone horizontal when you are recording. Shooting a video clip with your phone upright doesn't seem like an issue at the time because you're watching it on a device with a vertical screen, but as soon as you want to play the video anywhere else, your clip will be fighting for space with two black bars on either side of the screen. 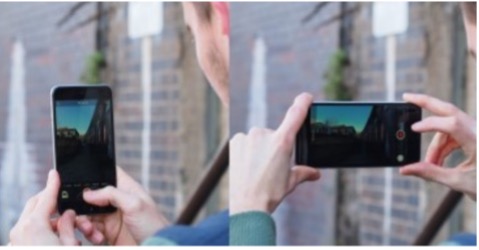 2. KEEP IT SMOOTH AND STEADY

Your smartphone is small and light, but it can be held surprisingly steady. The key thing is to use both hands, and lock your elbows into your body for extra stability. Try it yourself, and you'll see that although this won't eliminate the small involuntary movements (or shaky hands!), at least these won't put the viewer off like the sudden jolts you sometimes get from holding your phone one-¬handed.

But what if you want to introduce some controlled movement into a shot? With your elbows locked into your body, use your feet as a solid base and move the whole of your upper body not just the camera. This will result in a smoother motion every time.

3. MAKE THE LIGHT WORK FOR YOU

Light is a wonderful thing, but it can be a friend or foe when shooting video. If you want to shoot better video, you need to know how to work with the available light and use it to your advantage. When outdoors, try and find a position where the sun is evenly lighting the scene you want to record.

If some parts of the shot are looking too bright or too dark, get into the habit of changing your position and finding another angle which allows you to still achieve the shot you wanted, but you've got the light working for you not against you.

Bad audio can ruin a great piece of video, and just because your smartphone can record a decent voiceover in a quiet controlled environment, it doesn't mean you can 100% rely on it when you're out and about.

If it's a perfectly still day, go for it, and if you want to video someone talking, get as close to them as you can to make sure they are heard above any noise in the environment. No doubt you've heard the horrible sound wind noise makes on video clips, so locate the built-in microphone and try to shield it from the wind, but be prepared to remove the audio later it it's noisy and unusable.

5. KNOW WHAT'S POSSIBLE (AND WHAT'S NOT)

You want to shoot better video on your smartphone, so before you start shooting, it's good to know what the limitations are. Check the amount of available memory and battery life, as you can't just slot a couple of spare batteries into your smartphone, and you don't want to waste valuable shooting time scrolling through photos and videos deciding what to delete to free up space!

Smartphones don't have zoom lenses, and any digital zoom features will reduce the quality of the image, so aim to find a position where you are close enough for your subject to fill the frame.

Once you are done play the video and ask others for feedback then share the video either through Dropbox or WeTransfer.

If you have any questions get in touch with us at info@specialolympics.com.au